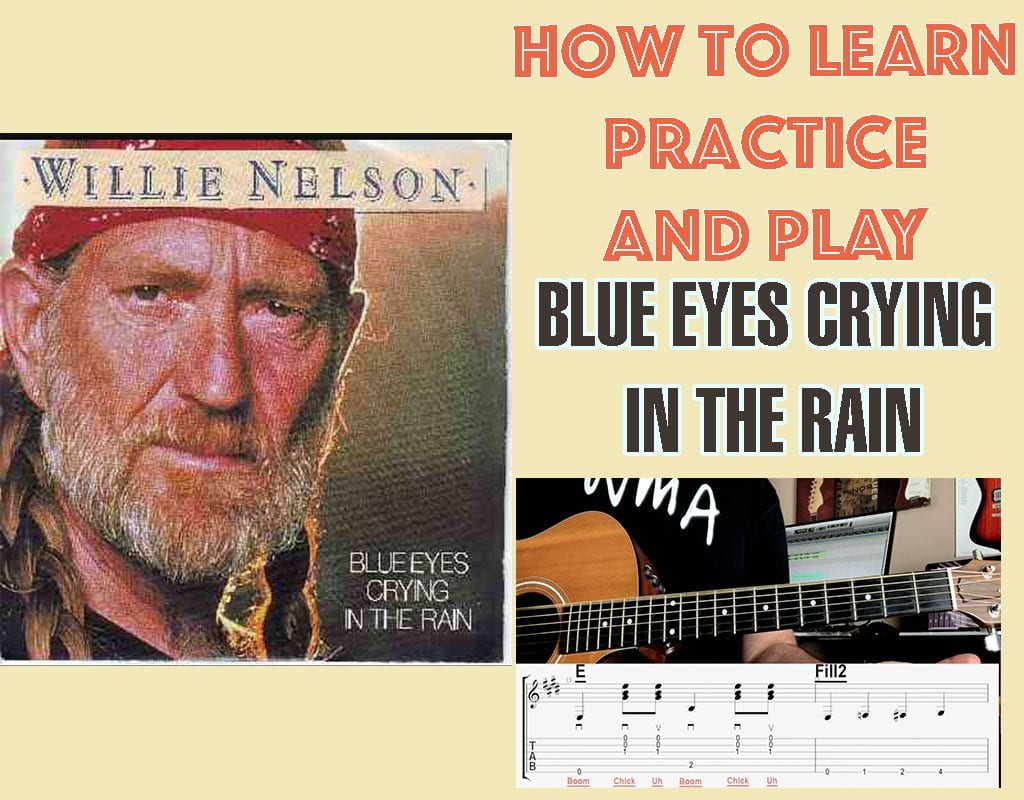 In this lesson, I am going to show you how to play “Blue Eyes Crying In The Rain” by Willie Nelson.

This is a really great song if you are relatively brand new to playing guitar.

The song consists of just 3 open position chords that are among the easiest chords to form for beginner guitar players.

If you already know how to play chords and cac strum well and you just want the chords, click here.

Here’s how I’m going to break down this song:

-We’re going to go over what open position chords are used and how they are played.

-I’m going to show you the 2 main chord progressions / patterns of the song.

-I’m going to show you a simple “strummy” version of the song that leaves out the fills.

-I’ll show you how to play the fills

What Are The Chords For "Blue Eyes Crying In The Rain"?

The first step in learning “Blue Eyes Crying In The Rain” is to be sure that you know how to play all of the chords that appear in the song.

This song is great for beginners because it really only uses 3 chords, the E, A, and B7.

There are 2 instances where you play different chords as little “transitional” chords. They would be: Esus4, E/C, E/B, and E/Bb

Don’t let those last 4 chords scare you with their names. They are easy to play and you only seem them for split seconds.

Here are the chord diagrams for each chord:

**the A chord could be fingered in 2 different ways depending on what feels best for you. For this song, I prefer to barre the A chord, but you can just as easily do it the alternate way. ** 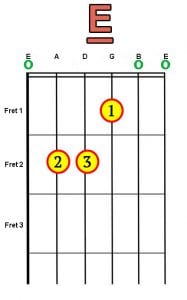 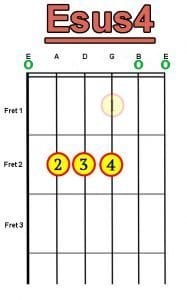 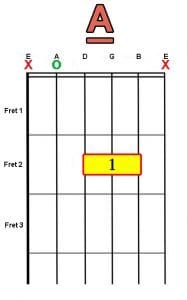 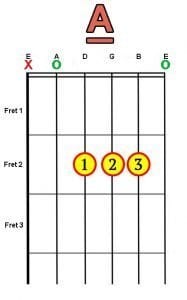 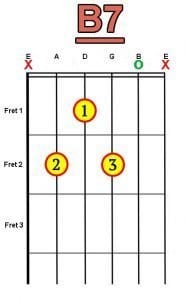 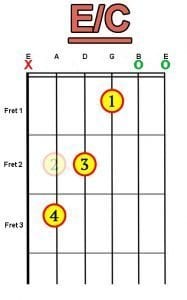 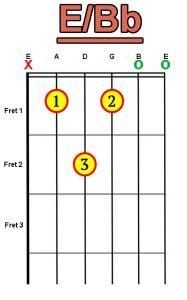 What Is The Strumming Pattern For "Blue Eyes Crying In The Rain?"

The strumming pattern for Blue Eyes Crying In The Rain is a pretty straight forward and super common rhythm that is found in numerous country songs.

I’ve heard it called the “Boom-chick-uh” strumming pattern, and that’s the way I like to think of it.

The song has a shuffle/swing, which means the 8th notes are not “even” like a ticking clock. They sound and feel more like a horse trot.

The trick with “Boom-chick-uh” strumming is that the strums alternate from low to high on what strings are strummed.

Having said that, the key to doing “boom-chick-uh” in this song is to alternate what string the “boom” happens on.

Heres the tab for the strumming on the E chord. Notice that the “boom” changes from low E string to A string.

The same concept happens on the B7 chord. However, we are going to do 2 things differently. For one, the order of the “boom” changes to “A string, then E string.” Secondly, we have to move our middle finger off of the note on the A string to fret the 2nd fret of the low E.

Lastly, the same concept happens on the A chord. Just like with the B7, we are alternating “A string, then E string.” As stated previously, you can fret the A chord either as a barre or the common way with 3 fingers. It’s up to you.

There are 2 main chord progressions for Blue Eyes Crying In The Rain and they are pretty straightforward.

In this section, I’m going to keep it simple and not add in any of the fills.

In case you don’t understand my shorthand…that’s…

Putting the patterns in order, the arrangement of the song looks like this 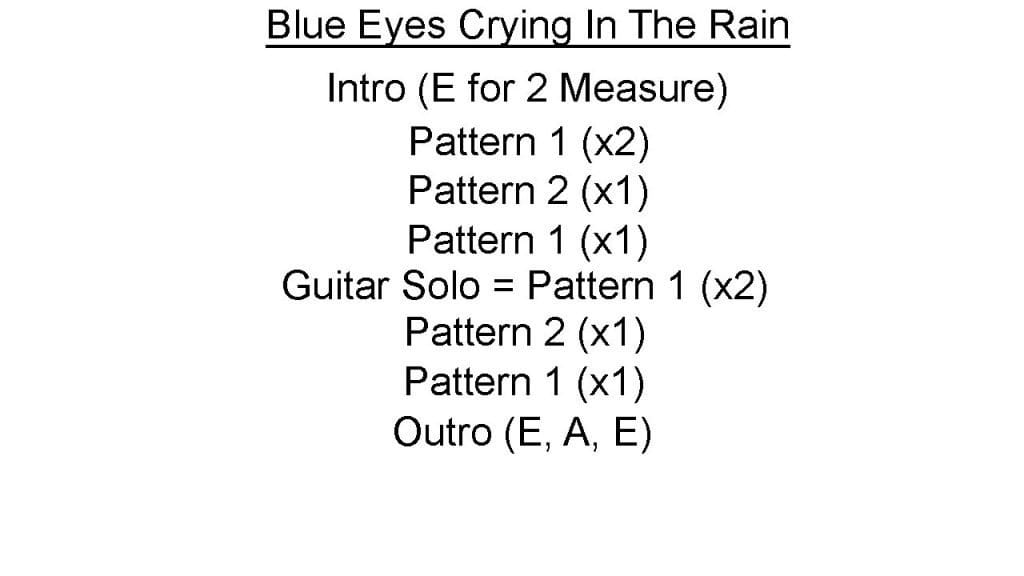 Blue Eyes Crying In The Rain: Simple Strum Play Along

While you can definitely keep the song super simple and not do any of the fills, I think it sounds way better and more “polished” when you do.

Besides, these fills are NOT hard at all! 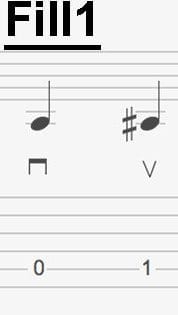 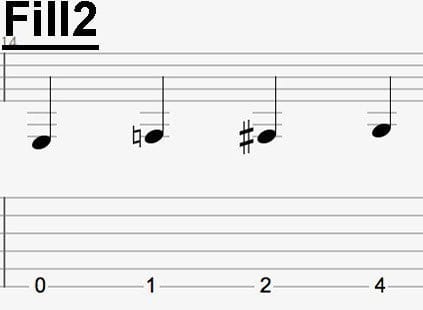 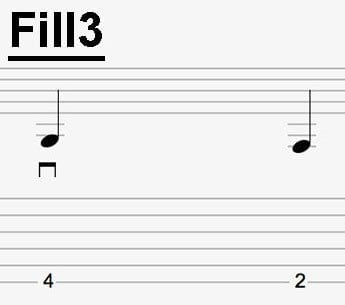 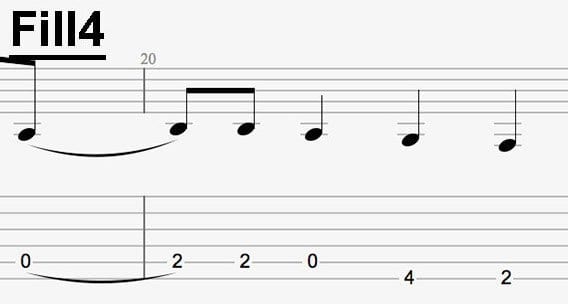 When you add the fills in, Patterns 1 and 2 look like this

For the Intro, there’s a slight change in the strum pattern (you’re playing an E, but starting the “boom” on the A string instead of the E string…and you add in a hammer on)

When you put it all together the song structure is as follows:

Blue Eyes Crying In The Rain Play Along - With Fills

If you enjoyed this lesson, if you have questions about how anything goes, or if you would like to request another song lesson…then hit me up in the comments section below and tell me so!

Also, check out some of my other guitar courses

“Blue Eyes Crying In The Rain” is found on the Willie Nelson album “Red Headed Stranger” which was released in 1975.